Written by Carla Gontier on November 4, 2019. Posted in Drip.

Ahoy, and welcome to what is now officially SILLY SEASON!

As I type this, it is pouring with rain in Cape Town (and now I am in Durban and it is also raining, and also I have just felt an earth tremor?!), and the work is raining down upon us (no subtle metaphors here).

I really struggled to find some decent content for this week (I know, I know, one should not force these things).Probably because I have been running around like a headless chicken, and I feel I need to gain some focus! All these to do lists just aren’t cutting it when you’re running between meetings with little time for the work required to deliver on the action items of the meetings!

Speaking of focus, all the media seems focused on is Ukraine and Trump, Johnson and Brexit, Mark Zuckerberg testifying and OH YES THE RUGBY WORLD CUP.

Honestly I did not watch it (I will never lie to you guys) but I did see this very amusing image of Faf De Klerk meeting Prince Harry in his South African undies and honestly that is all I needed to see. 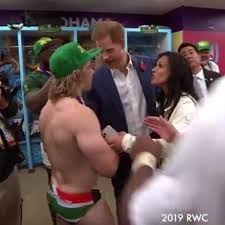 Before we get into The Drip this week, our partners at Point have asked that I include the following Movember announcement.

This year, if you want to participate, why not donate and be in with a chance to win the opportunity of a lifetime – shave Jaschka’s face so he looks totally ridiculous!

This week you can look forward to Zuck testifying in Congress about Libra (and other tangential things); December planning insights from Facebook (lol); the risk of innovation and a wonderful think-piece on The Women of Kabul.

As December approaches, and every client needs to get every campaign in right now (it’s like December sneaks up on us every year!) I sit here contemplating how we can get better at planning for this surprise month / holiday / madness.I don’t have any answers, but I did go down a rabbithole of finding ways to panic plan for this year.

In my pondering, I found this handy guide from Facebook around holiday planning for comms. There are some very interesting stats inside. 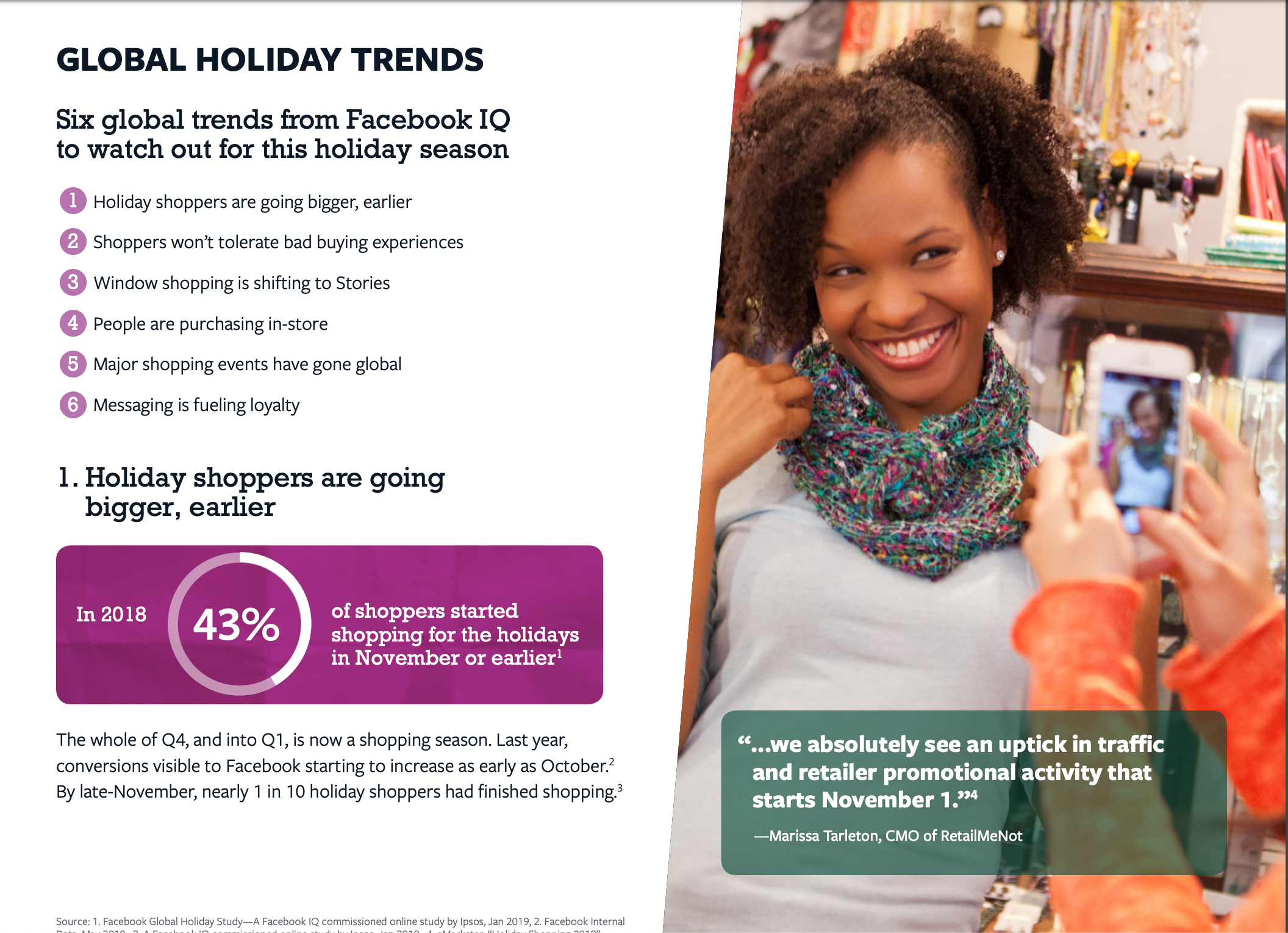 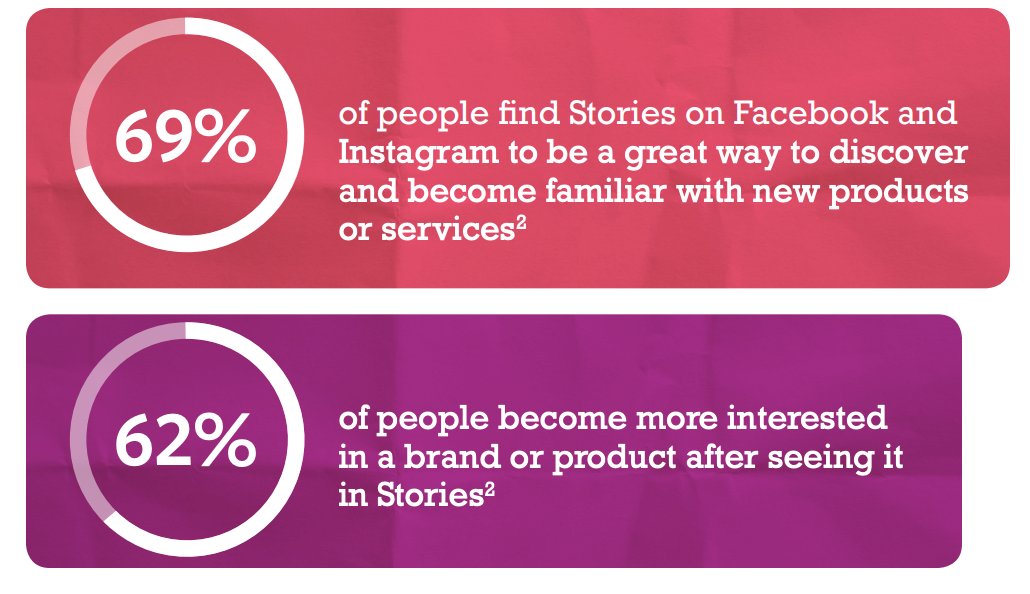 “During the 2018 holiday season, 63% of shoppers either watched or posted videos in Stories across platforms, such as Instagram, Facebook or Snapchat. In that same time period, more than a third of both millennials and parents said videos created by social media “influencers” helped them choose what to buy.

“There may well be room for a (fourth) manufactured shopping holiday in the US, and Singles’ Day (11:11)—with its spirit of treating yourself—fits nicely with other behaviors we see from millennial audiences.” —Kate Walters, Executive Planning Director and Head of Strategy at digital agency Swirl McGarryBowen”

On Comms Planning and Innovation…

This cartoon pretty much sums it all up… 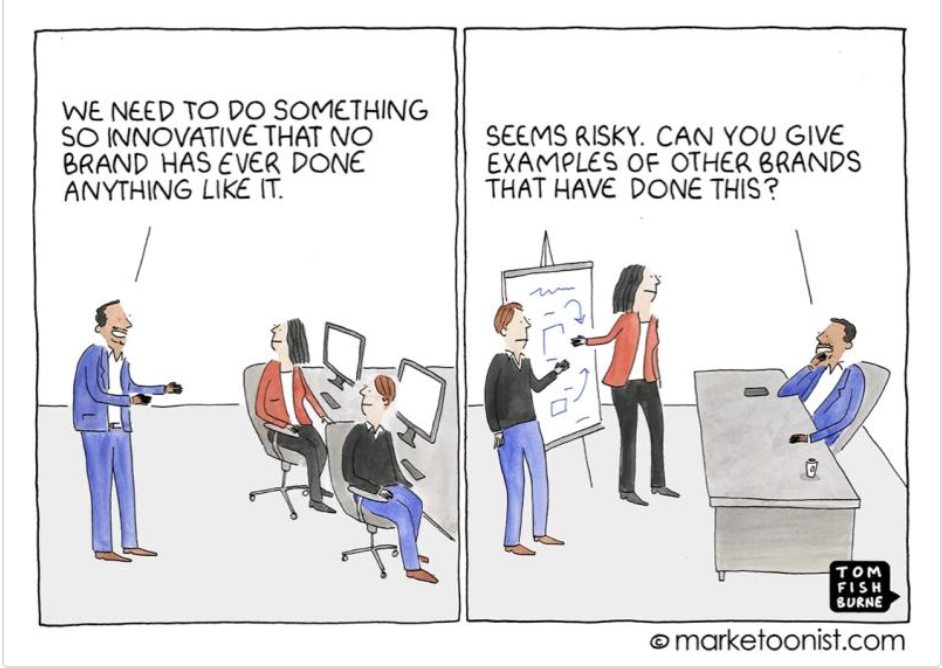 Innovation means taking risks. Because playing it safe is the new risky.

And for us, this can mean looking past the brief and asking yourself “What does or would this client really need, or want?” not “what other silly addition are they asking for that suddenly popped into their head”?

All too often recently we’ve been briefed on simple jobs that are supposed to be one thing, when it turned out that they were entirely another. So we have to ask ourselves every time – what is the real requirement here? Is the underlying thought that this needs to be entirely bold and new? And if so, how do we get to that point (with bravery)?

Remember: the brief is not the brief.

The bottom line is that we have to get comfortable being uncomfortable, as that’s where innovation lies. I am sure many of you are feeling discomfort this week 😉 It’s good for us.

He talks about content and visibility and equities and values and public safety and privacy and other buzzwords.

He gets quizzed on personal data and people’s right to privacy and eventually they get around to digital currency and the idea of a digital Dollar. One congressman asks him if it would not be easier to use a digital Dollar rather than creating something separate (like Libra, for example). Zuck responds by saying: “My understanding is that the community is fairly split on this point. From a US securities standpoint, it would be significantly simpler. But from a global payment standpoint, it may be less welcome in other places, if it’s only 100% based on the Dollar.”
Interesting.

Does Zuck Understand The First Amendment?

This think-piece questions whether Mark Zuckerberg and Facebook actually understand the first amendment (the right to free speech. Or rather, the right which prohibits the government from limiting freedom of the press and unabridged free speech).

The issue comes in when Facebook sees itself not as a media outlet, but as some sort of fifth estate, unencumbered by the morals and codes to which the media is upheld. Zuck seems to be claiming that Facebook is not a media outlet, and therefore when he advises political campaign candidates, he should not be held to account for it. Hmm. Interesting.

The Women Of Kabul

Women in Afghanistan have (to put it mildly) not had an easy time of it.

I’m sure nobody in Afghanistan has had a particularly good time in the 21stcentury.

Gender equality in the capital, Kabul, is the topic of this in-depth feature on WePresent (a FANTASTIC source of in-depth reads on diverse topics, FYI). Discussing topics from gender and pay inequalities to growth and progress in the country, the article seeks to unpack the incredible complexity of a culture steeped in patriarchy and instability as a result of war and cultural restrictions through the lens of individual women who have fought for – and won – equality in their respective fields.

Explore each of these human stories, and see how the struggles to succeed and the failures along the way have made these woman stronger, and even more committed to succeeding despite great odds. 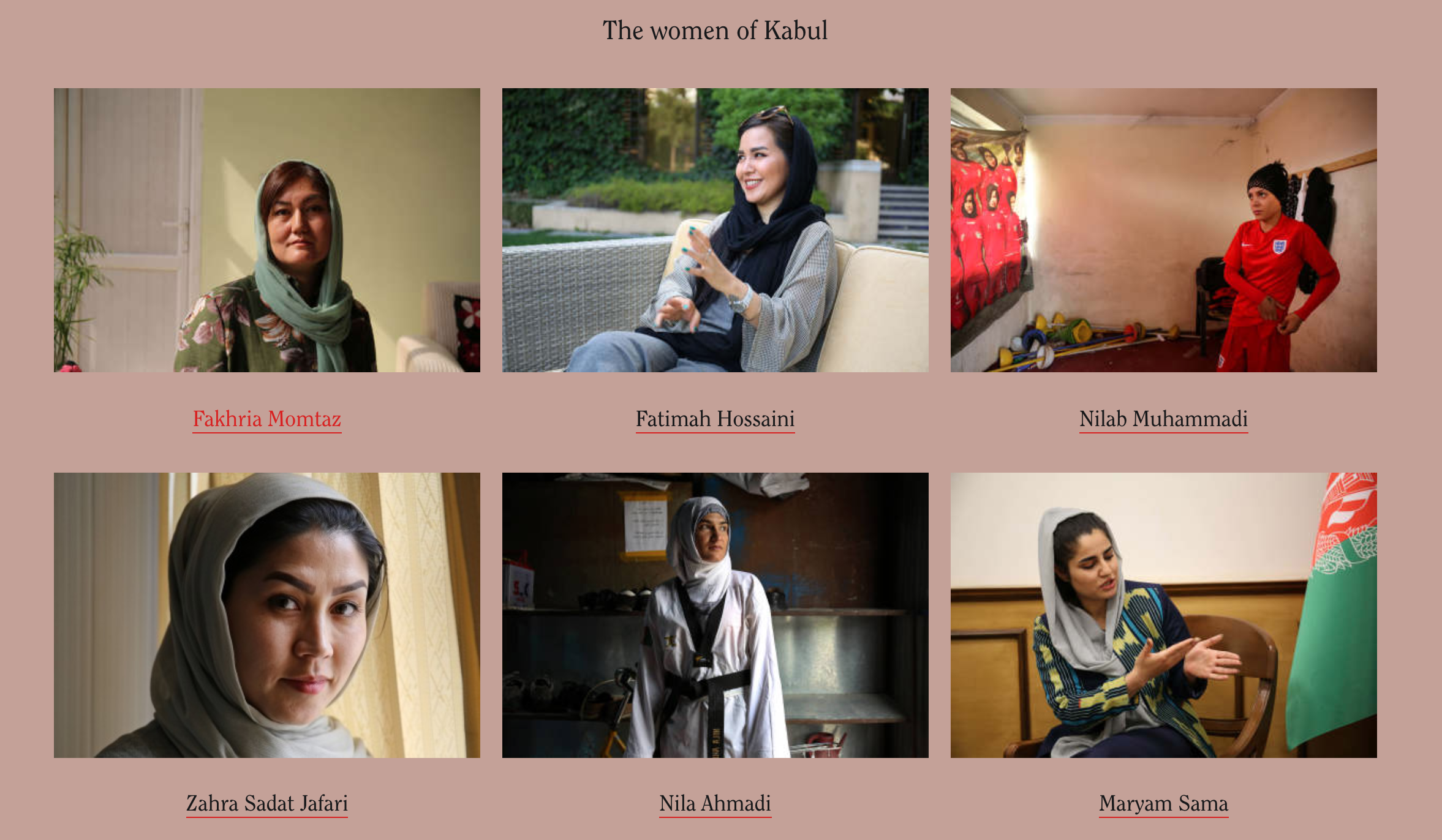 Phew.
This was my Everest.
Love to you all, and happy MOvember.