Ahoy there! Welcome back, and hello to any new visitors.

I have had a good week. Some of it’s been frustrating (you know when you give a presentation and you just feel like it could have gone so much better? That). Some of it has been super exciting! Our innovation day in Durban is in full swing, and the whole team was all hands on deck in Durban, wrapping goods and stacking shelves.

Outside of work, I have been renovating my house for the past two months and – whilst I am happy with the results – I will never go through that hell again. I did not know there were so many decisions to make. Never have I been so paralysed with choice over the shade of forest green to paint a single small wall in my bathroom. I also didn’t know that it was my responsibility to ensure that the builder did not install the window skew. I thought windows were installed straight, as a general rule.

But, we will rebuild! (See what I did there).

This week I look at the following: a focus on consumer moments; some awesome examples of effective retail campaigns; Snapchat launching creator shows (like YouTube, monetising content basically) and true crime podcasts – my personal favourite! I also go on a slightly personal tangent about not drinking.

Without further ado, let’s get to it…

Moments That Bring People Closer Together

This great read by Facebook IQ looks at the everyday and not-so-everyday moments we create in our own lives, and how and why we use social media to enhance those moments. It’s a great read for anyone who creates any sort of content at all, whether you are creating it to live online or not. It’s about tapping into consumer mindsets and the occasions that mean something to them – a coffee before work; walking their dog; birthdays; anniversaries… whatever the moments, the way people engage with moments has evolved over the past few years, and marketing departments need to evolve with them.By the way, if you are ever looking for incredible consumer insights about very niche audiences, or a specific consumer group in a specific country, Facebook IQ is a great source of information.

Some of these campaigns are so simple and effective, it hurts that we didn’t think of them. My favourite is the Very campaign, which managed to cut through clutter of all the massive retailers during Christmas, coming out on top ahead of competitors who had much bigger budgets, because they chose to centre their entire campaign on mobile and moments. They were visible everywhere during shopping occasions. They also created Spotify playlists where “party” were tagged in the name, and slotted in their ads during November and December, helping to generate awareness and drive sales over the period.

Snapchat only brought in ad sales to Africa last year, so brands in SA and Africa have been slow to adopt the channel, and since Snapchat began declining two years ago, it has not driven much relevance in SA, with Facebook, Instagram and Twitter overshadowing it.

“Snap is opening up Snapchat to let celebrities and influencers to create their own shows — and make money from the content — in the same short-form, vertical-video orientation as Snap’s slate of 80-plus original series.

For Snap, the Creators Shows initiative provides a way to give its most popular creators to extend to their reach — and keep them invested in building their businesses on Snapchat through monetization, as YouTube has done for years. Snap will provide a revenue share of advertising for Creators Shows but isn’t disclosing terms of the partnerships.”

If any of you have found great examples of Snapchat in SA, please do share. I’d love to explore more about it.

This REALLY WEIRD animation is a graphic representation of a mescaline-induced psychosis. Self-described as a drug-fuelled rant, it is crack for anyone who loved all the writings of Hunter S. Thompson, and need a dose of Fear and Loathing in Las Vegas. The story is told in the style of Hunter S. Thompson writing whilst telling the story of Franz Kafka’s Metamorphosis, all to promote Good Books. I don’t really understand it but I love it anyway.It’s batsh*t in the best way.Thanks Bryce for this weirdness 😊 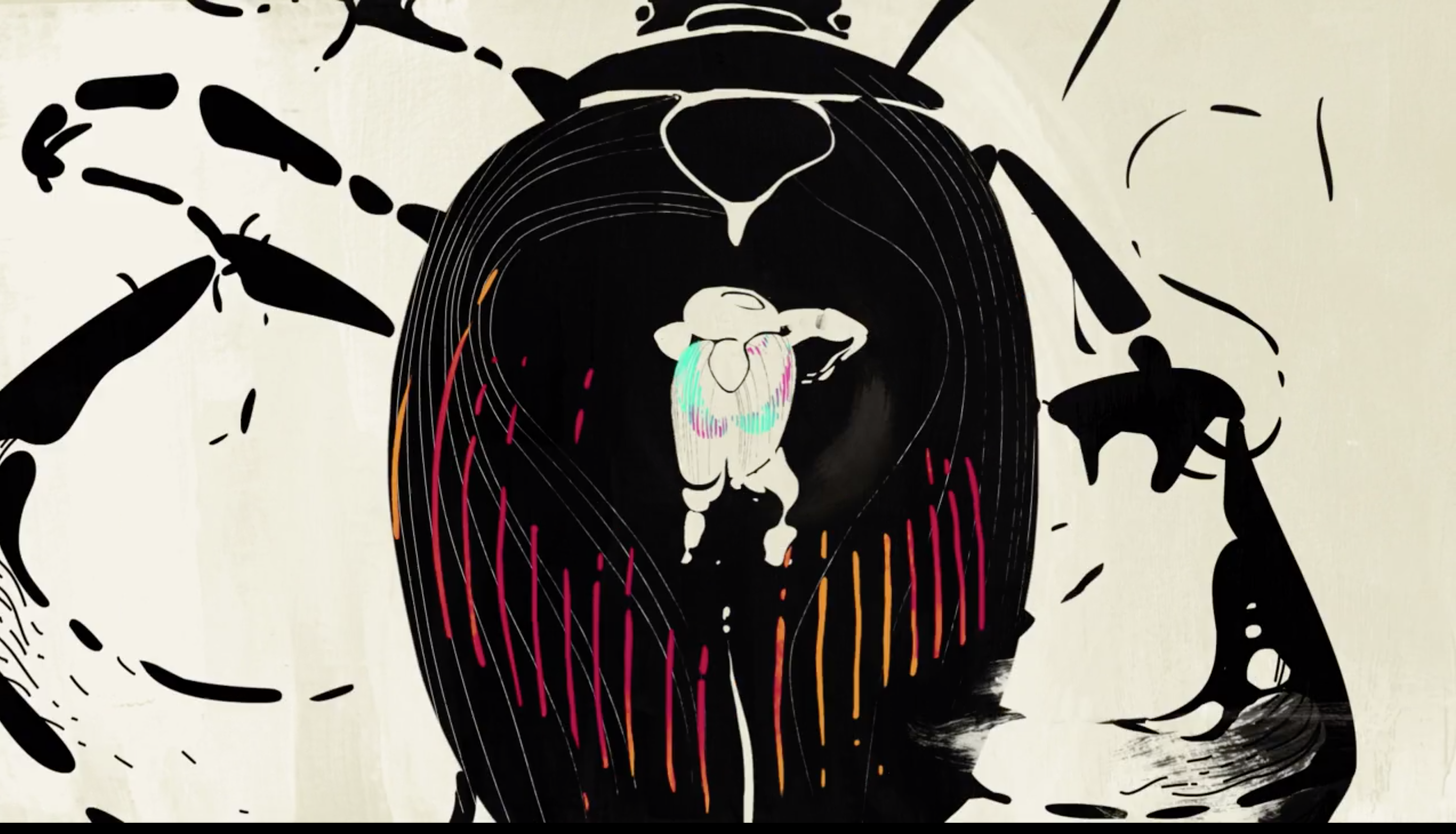 Guys, it wouldn’t be a good week without the inclusion of a podcast. This week’s top picks go out to the following crime and investigation podcasts.

Crime junkie – Right now, I am ADDICTED to Crime Junkie. It is equal parts fascinating and infuriating. The host looks at crimes that are mostly unsolved, or where there are unanswered questions when it comes to the guilt of the accused. I can’t get enough.

Serial – Serial is incredible, and Season 1 follows the story of the death of Hae Min Lee and the man accused of murdering her, Adnan Syed. It is chilling, shocking and scary, because you don’t know who is guilty, what is true and you can easily imagine something like this in your own life (from both sides).

This website is the Third Strike Campaign website. For anyone who knows anything about the American justice system, you’ll know that there is a three strikes rule. If you commit three non-violent drug offences, you can get mandatory life in prison. The website is incredible, as the use of video is all-encompassing. You land on the site and are immediately hit with video content that is really powerful. You can then enter the site, and listen to real life stories of the prisoners themselves through audio clips, whilst scrolling through that prisoner’s story to see images, text and the timeline of that prisoner. You can read the full story of the prosecutor, the prisoner, how they were caught and about all the times they were arrested, leading to their third strike. The website aims to highlight the ludicrousness of the three strikes rule from all sides, including the many judicial officials (judges; prosecutors) who also feel the law is excessive.

Another quite cool website I found is a Game Of Thrones data visualisation website. This website is cool because its entire purpose is to showcase cool technology and data.

Finally, Alcohol and the Ad Industry

Strap in guys. This one has all my favourite things. It’s WORDY and PREACHY and allows me to stand on my soap box and tell you all exactly how I feel.

In all seriousness though, this article really hit home for me. It centres around the ad industry’s relationship with alcohol, and why we should be empowering people to know the choice to drink is yours, and not a mandatory one made for you.

I do not drink, but too often I feel the weight of my decision not to drink, and of not making the effort to party at work and with my friends. As most of you know, I rarely join for after-work events. I try to stay away from these situations, not because I don’t trust myself not to drink, but because it is more difficult for me to connect in those contexts these days. I would rather have a coffee or go for cake than sit at a bar drinking bad coffee or alcohol-free beers.

My relationship with alcohol has always been a difficult one. I have had alcoholic family members, and people close to me who are too dependent, who have needed to go through AA. But more than anything, I’ve had my own struggles with alcohol.

I am not an alcoholic. Not really in the traditional sense that people like to think – we like to categorise drinkers into those who are alcoholics and the rest of us who “can handle our alcohol”. So I don’t have a bigger problem than anyone else has. I don’t sip vodka in the pantry late at night secretly. I don’t hide bottles behind bins in the hopes that my partner won’t find them. I haven’t gone through AA, and I don’t have a drug problem. But I did have a problem.

I would use it as an emotional crutch. When I had a horrible day at work, I would have a few drinks afterwards. When I was going through a break-up, I would get drunk. When I was in emotional turmoil, I would use wine to ease the pain. In my early 20s, I could physically feel myself winding up like a coil from work or university stress, until midweek rolled around and I could get drunk with my friends, and the coil would unwind and the spring would loosen again.

As I got older, the booze became more expensive and the occasion changed – I would drink two bottles of wine over dinner with friends, rather than 10 beers at a bar. But the result was the same. I needed alcohol. I wanted it. And I was dependent.

So I made the choice to not drink as much. For about three and a half years I only consumed alcohol on one night a week, and only on the weekend, and it was only two or three beers. But even that didn’t last. After the third year, I began drinking more frequently again, and I soon found myself drinking mid-week with friends, because it is hard to go for dinner with friends and not have a drink.

Last year I decided that I needed to take control again. Giving up alcohol entirely hasn’t solved everything, but it has solved a lot of things. For one, the highs are not as high, but the lows are not as low. My mood remains relatively consistent, and I don’t lash out in anger. I don’t feel turmoil like I did, and I don’t feel depressed anymore. Another thing that has changed is that I no longer feel crushing anxiety, which has always been fuelled by alcohol and hangovers for me. I can deal with the difficult clients now without feeling as though the world is coming crumbling down. I try to see it all as part of my job, and to let it wash over me, without needing to wash the feeling away with a drink. I have also saved a ton of money. There have been other, more personal reasons for quitting and for staying sober. For now I will just say that to me, I’m just a better person without alcohol. I might not be as much fun as I was, but I can live with that.

So how does this relate to you? I suppose because the decision I made isn’t supported by the environment we have built in the ad industry. Cannes; Loeries; Bookmarks; post-work drinks; Christmas parties – these events are all centred around drinking and the after-party, all under the guise of “building networks and relationships”. Not as much fun for your Muslim; alcoholic or tee-totalling colleagues. I don’t want to preach. I don’t think there is anything wrong with having a few drinks and enjoying life. But I do  think we should think about our relationships with alcohol, and  evaluate the ways in which we deal with (and allow others to deal with) the pressure of this sometimes chaotic world of advertising. I did and it changed a lot of things for me.

That’s all for this week. Sorry I got so emo there in the end.

If you have any thoughts you’d like to share about any of the content, or you want to just have a chat, or even have some things of you own you would like to share, please send them through to me throughout the week😊